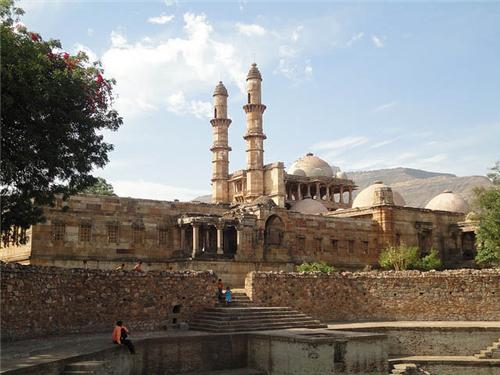 There is quite a dearth of monuments in Anand. Compensating the lack are the ruins of an old city not far from Anand that we shall discuss on this page. The remains of Khapra Zaveri Palace are located at the foothills of Pavagadh hills in Gujarat.

It’s located near the base of Machhi when you move towards Champaner from Anand. Not very far off from Anand, it’s pretty much easily accessible from the ‘city of joy’ providing ample for those travelers and tourists who love historical monuments.

The Palace is situated along the origin of river Wishwamitri. The view is spectacular specially juxtaposed with the ruins of thin once a glorious Palace.

The palace belongs to the early part of 16th century sultanate era, in the ancient capital of Sultana Mahmood Beghara lying at the foothills of Pavagadh. The Palace is a fine example of Sultanate architecture with massive arches and domes and huge gates. It’s built on a rectangular plot of land enclosed with massive fence on all four sides. The remains of the entrance gate itself are a telltale of the grandeur this place must have boasted of at the peak of the Sultanate Empire when this palace had been the hub of activity.

The site gives a spectacularly breathtaking view of the River Vishwamitri from the roof top of the palace. The green surrounding provide a lush ambiance with ample of opportunities for those quite moments to be one with nature and the overwhelming history of the place at the same time.

There is a beautiful Mosque inside the palace. Adorned with mehrabs, pillars and arches and domes and jails, the mosque is spectacular with its beautiful architecture juxtaposed with natural green foliage. The Garden in the precinct of the palace is another reason to make the site rather attractive.

Khapra Zaveri palace is a perfect tourist destination for those intending to explore the historic ravages.
Atak Gate one of the most popular among the 9 gates of the fort leads a path right to the top of the Pavagadh hill. The view from the top of the hill is majestic at best.

Kalika temple and Matar Kothar are two pretty famous attractions in the nearby surroundings. Kalika temple is situated at the top of the hill and is very significant shrine for devotees of Hindu Goddess Kali. In fact you would also like to visit another monument historically significant and also a marvelous relic of the ravage of time. It’s a Dargah (mausoleum) of Sadanshah, a Muslim peer. Other sites for excursion in this place are Chhashia Talav and Lakulish Temple. The temples attract a lot of pilgrims from all over the Hindu Population.

The entire patch of land is an Archeological Park with huge wealth of structures big and small scattered through the area.

The site is dotted with ruins and remaining of historic monuments for miles and miles, including several shrine, mosques, tombs, domes, arches, citadels and gates water structures, and so on.
Before the land was usurped by the British, the place has served as a center for several rulers including the Sultans, Mughals and Marathas.

Keep Your Camera Handy!
The palace offers picturesque sites perfect for photo buffs. All you need is pick up your digital device and head straight to the site. There is ample of views for those perfect shots with sandstone carvings, intricate stone jails, huge structures and royal ruins.

Champaner has a railway station. It is only 45 km (app) from Vadodara. From Anand you can hire a taxi or auto to reach the site.
You can use local transport facilities including Auto rickshaws and Jeeps to shuttle through the archeological park

Honestly you will not find the very fancy food restaurants in the local nearby area. Hence, local eating joints, restaurants, dhabas and food stalls will cater to your appetite. The food here has a local flavor to it. Do make a point to enjoy the snacks that local vendors and stalls offer, specially the deep fried spicy delicacies and mouthwatering snacks. Of course, your diet can take a break once in a while!

Where to Stay in Khapra Zaveri Palace

If you intend to make the most of this weekend getaway, do make arrangements for a stay of at least a couple of days to enjoy a visit to all the sites in ancient city of the Sultan. There are many guest houses,inns and dharamshalas in Champaner where you can have a comfortable stay at reasonable cost.

Winters and monsoon is the best time to visit this archeological site. In summers, the weather turns too humid and scorching to accommodate a comfortable excursion.