Amul was established in 1940 to end the corrupt hold of middlemen who exploited the farmers and milk producers in Gujarat. Over the years not only this cooperative federation became a success but acquired name, popularity and goodwill all over the world.

About Amul Dairy Cooperative in Anand

AMUL is a short abbreviation of Anand Milk Union Limited. Amul is a cooperative federation owned by 3 million milk producers in the Gujarat, making this federation the largest food chain in Indian and the largest dairy in the World. In fact there in one more interesting “largest” title hatched by the dairy, and that is ‘largest vegetarian cheese brand’ of the world.

The famous Hindi movie “Manthan” was also shot in Anand which tells the tale of the exploitation women faced and how Amul cooperative helped them empower.

Amul then became the center of Flood revolution or the white revolution in India. Before the milk federation was established, the milkmen used to travel long distances to other dairies which would spoil the milk before it reached the destination. This angered and distressed the milk producers and they went to Sardar Vallabhhai Patel for help. Sardar suggested them to organize their won federation and supply milk on their own cutting out the middlemen from the equation.

The establishment of Dairy cooperative society has changed the trend in terms of production and transportation of milk and milk products. In close association with GCMMF (Gujarat Co-operative Milk Marketing Federation Ltd), Amul has become the largest Industry in India, with a record turnover of about USD 1050 million in 2005-06 fiscal years. The success of Amul is courtesy to the Dairy Cooperative Movement which is considered the biggest one of a kind mass cooperative movement in the world.

Here are some inportant facts about Amul Dairy Cooperative in Anand that you would like to know about:

Dairy Cooperative Museum – The Museum is a located within the dairy complex. It’s a red sandstone state of the art structure that attracts a lot of visitors including students and tourists. 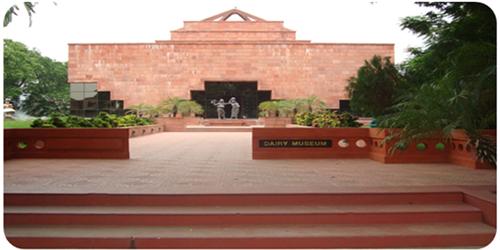 The Museum comprises of a Photo Gallery telling the tale of the origin of Amul Cooperative Federation into a giant Industry Indian nation prides in. the pictorial depiction of the growth and success of Amul dairy is the essence of the gallery.

Museum also has an auditorium which is used for workshops and seminars, interaction with guests and screening of documentaries

How to Reach Amul Dairy in Anand, Gujarat

Being a popular landmark, Amul is easily accessible. Regular bus services, cabs and autos are available from all parts of the city to reach the there. Buses and Taxis also ply from Vadodara and Ahmedabad to reach the place.

Best Time to Visit Amul Dairy: The weather in Anand, Gujarat is inviting in between October to March. Visiting the dairy is a cool and pleasant weather will add to your experience.
Entry Fee: There is no entry fee, but for that you need permission.
Visiting Hours – 2:00 pm to 4:00 pm

Amul Dairy Cooperative is the pride of India, make sure you do not throw litter but in the trash bins provided. Adopt this good habit and enjoy keep the surroundings clean and green!